Length of time the encounter lasted: 5 minutes 1st time, couple of minutes next 2 or 3 times.

How many witnesses: Just me during actual sightings, couple of visitors during sound incidents.

“I have been having incidents for 2 years now. The very 1st sighting incident happened around Midnight on a very hot night, maybe around July 2012. I was cleaning out a very old house on my property that was going to be torn down. It had old windows that were from the floor to the ceiling. These windows were 8 feet tall and all the glass had been broken and gone many years prior to this. It was midnight and I was in one room bending over picking up a few items when I felt this weird tingling sensation and it seemed that I felt numb. (This feeling has happened to me several times since this 1st sighting 2 years ago in 2012 and it’s mostly when they are around on my property and I don’t like it) I knew that something was watching me from the window at my back so I turned around and there it was. It filled the entire window from top to bottom, and side to side. It was Huge.

I was no more than 5 feet from this window and there was a small lamp stand right beside the window which was turned on, and it lit up the entire creature. I could see it as plain as day and I was simply stunned and in awe. “What was this thing” This staring contest went on for at least 5 minutes. (I was simply shocked and frozen in place, but NOT scared)The creature never seemed to blink. I moved a few times from side to side as I was trying to figure out what to do, and the creatures head moved as I moved and it stayed focused on me. It had a blank look on its face and never opened its mouth so I never saw if it had any teeth or what kind. Its eyes seemed almost like a transparent glass with a red glow behind them. Finally the creature blinked a couple of times and turned its whole body and walked straight towards the woods.

I walked to the window and watched the creature walk away and I could see its backside and it had a huge muscular buttock and as odd as this may sound, as it walked you could see its “crack” from lack of a better word. SORRY. It went crashing into the woods and made a lot of noise as it went. I waited 15 minutes before I had the courage to leave the house and as I stepped outside it made a loud, long scream from within the woods and I felt it did not want me to come towards it, and I sure wasn't going to.

2nd sighting incident……. 3 months ago from today, Saturday 4/26/14, I was throwing out some old Bar-b-q chicken for my neighbors cats and they were really lapping it up so I went to my kitchen to grab a couple more pieces. I stepped outside to place the chicken down and noticed that the kitties were gone and all of a sudden a smaller version of the 1st creature I saw stepped out of the nearby woods and was stooping down picking up one of the pieces of chicken I had throw-ed out. All of a sudden it seemed to notice that I was standing there and it ran very fast back into the woods with blinding speed, but you know what? It didn't make any noise at all as it ran through those woods. I remember thinking how weird that was.

3rd sighting incident……. Just 2 days ago around Thursday night 4/24/14. I came home from my sisters Birthday party and it was about 8:30 pm as I drove into my driveway my headlights shined on the woods right behind my trailer and there stood another really tall creature like the 1st one I saw 2 years ago but it was too dark for me to be certain it was the same one. Its eyes were big and glowing red as it reflected from my headlights. It turned immediately and ran into the woods. The different thing about this last sighting was that I had a totally different feeling than from my other sightings. This time I felt worried, slightly afraid, and maybe a little threatened. (I don’t know why?) but this made me find the KBRO and turn in a report."

“1st creature”…. at close range (5 feet away) in 2012 was over 8 feet tall, Huge bodied. Blackish hair over entire body, but very sparse in the chest area and I could see the skin. Exposed skin was the same shade as a Mexicans skin. Huge human like nose but the nostrils were very flat and wide on the face. Very pronounced brow ridge with some grey hairs mixed in. Long sloping forehead. Head was not round, but had a coned shape near the top. Very wide mouth that remained closed during my sighting. It seemed to have a big Wart or Mole growing on the side of its upper Nose ridge that almost seemed to intrude into its eye on one side. Eyes were alike a transparent glass with a Red glow behind it. It seemed that I could see the Brownish or Blackish pupils, but the Red glow was the most predominant feature. I also saw the bottom of what I took as an ear lobe on one side hanging down a little bit from under the hair. As the creature walked away I could see its butt crack and it had a huge butt. As it walked away you could see its huge muscles along its legs and up to its hips. I got the impression that this was a Male creature for some reason.

“2nd Creature”.……. was a smaller one, maybe about 5 feet tall and very skinny. Faster and more agile that the 1st one I saw. I could not tell if Male or Female. This smaller one had dark hair all over its body, and even on the face. I seemed to think by its actions that this was a younger version of the 1st one I saw.

“3rd creature”….. to dark to be very sure, but it was NOT the smaller young one, yet it did not seem to appear as big as the 1st one I saw 2 years before. Mostly what I saw of this creature was its dark outline, and it glowing red eyes, but the “feeling” on this occasion was different from the other incidents and I felt very worried and concerned and decided to contact your group.

Any additional Info? “I have had these creatures slap the sides of my trailer, and hit my windows in the back of my trailer while visitors were present. Also had my neighbor’s dog kicked, or threw across my back yard as I watched out my back door window. Dog was flying some 8 feet off the ground, sideways, and sailed over 20 feet before hitting the ground and running off whimpering, and has never came into my yard ever again.”

I was totally blown away by meeting this witness and hearing his story. This is a very plain and common sensed country man. He lives a simple life in a trailer on some family property left to him. He is 50 years old and has some physical problems that give him some disability. He was very concise and never wavered as he related his story to me and I ask many questions and listened and watched carefully for any discrepancies, there were none.

This man did not believe in Bigfoot before his first incident but had seen some TV shows while growing up and knew a little about Bigfoot. He never dreamed there were any nearby his home place.

He has since learned that they do eat the food scraps that he sets out and has come to the knowledge that they prefer certain foods over others but will take the opportunity to eat anything available.

They seem to prefer Wheat bread over White bread. ????? The Wheat bread is always taken almost immediately while the White bread stays around for a while.

They love chicken, but seem to take it faster when he throws out Barbecued chicken.
(This researcher believes it is because of the Barbecue smell)

They certainly love Cat food, and he has set out Watermelons and they will be gone before morning.

This researcher has walked the property and found this small patch of woods behind the trailer to be very thick, and full of thorn bushes. I found a small stream flowing with water deeper in the woods that offers a constant water source. I also found several wooded tree lines, and fence rows that could lead someone unseen in the night from this small patch of woods to larger tracts of woods a few hundred yards away in 3 different directions.

We have placed some trail cameras in these woods behind the trailer and will soon be setting out some Wheat bread and Chicken to try and get something to come to it.

One last note…..the next door neighbor recently put up some motion sensor lights and a security light behind his house because he kept hearing someone moving around on his property at night. That is exactly where this witness’s yard and trailer sits. 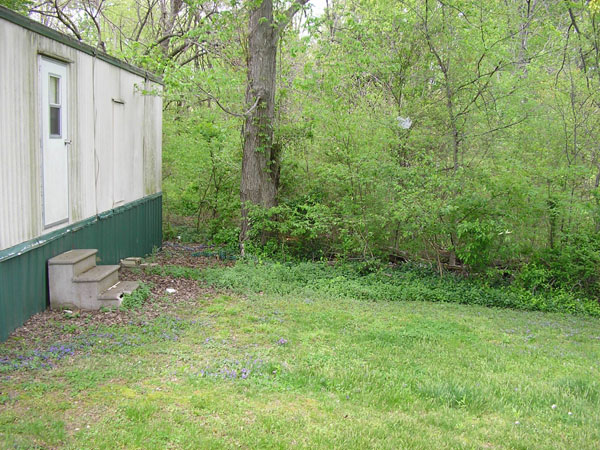 The back of the trailer where the witness was looking out the window of the back door and saw the neighbor's dog come flying out of the woods 8 feet in the air and almost across the entire yard before landing. 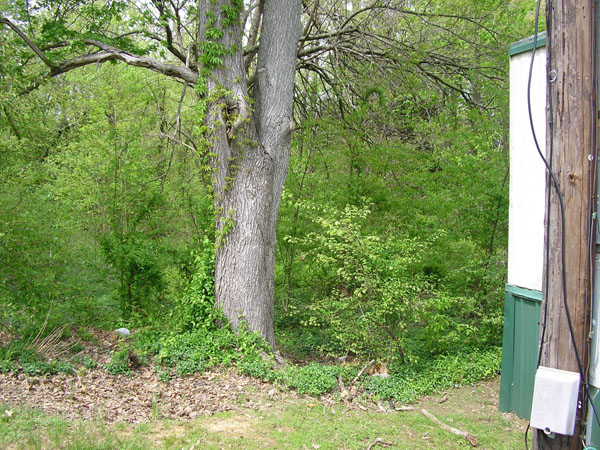 The back corner of the witness' trailer where the Little creature came out of the woods and was eating the chicken he had been feeding the cats. 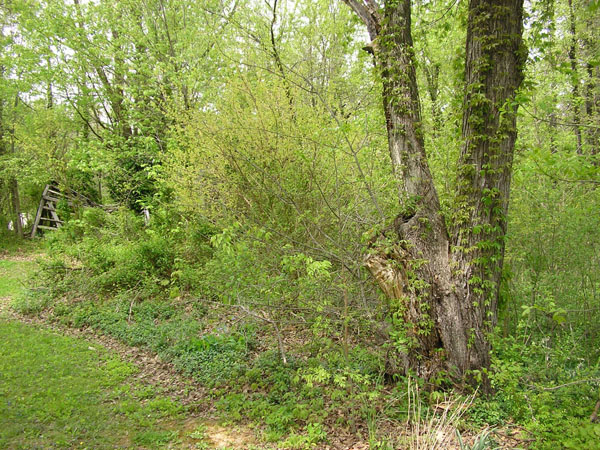 This is where he saw the creature with glowing red eyes step out of the woods as he arrived home around 8:30 PM on Thursday night 4/24/14 and he got a scary unusual feeling that made him contact the KBRO (us). 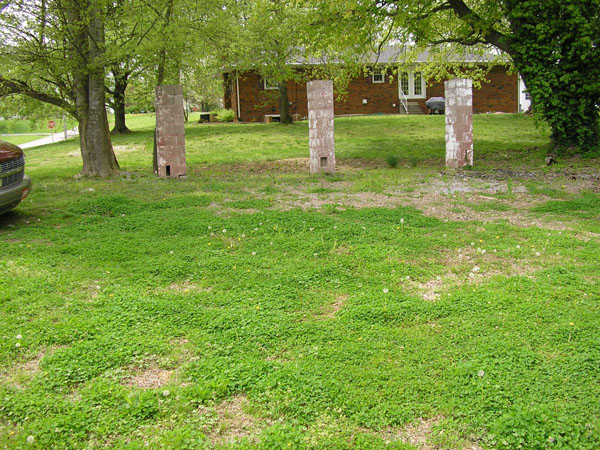 The location where the old house once stood where the witness had the 1st sighting through the window.