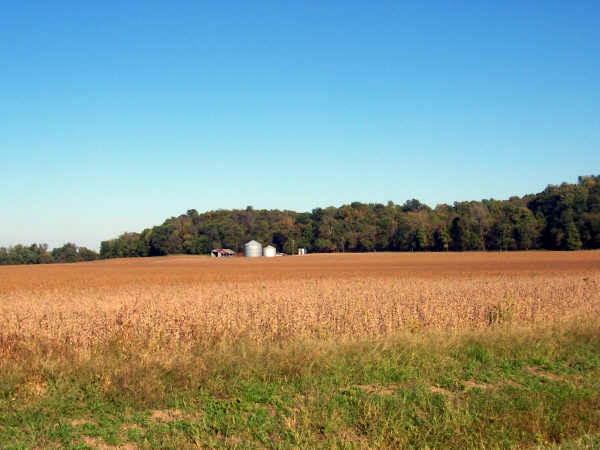 The infamous 'Slack Farm' on Dike Rd. traveling away from the Ohio River in Uniontwown, Ky. Immediately to the left and stretching to the treeline witness the scene of the largest NA grave desecration in history, strange animal mutilations and the reputed home of bigfoot. Directly behind viewpoint lies the dikes and the Uniontown boat dock, scene of the 1996 sighting of a ten foot tall, gorilla-like creature. Uniontown, Ky has a long tradition of bigfoot activity. Some of the locals I've spoken to simply referr to these unknown creatures as 'gorillas'. (photo by Kaleigh Duncan, 8-06) 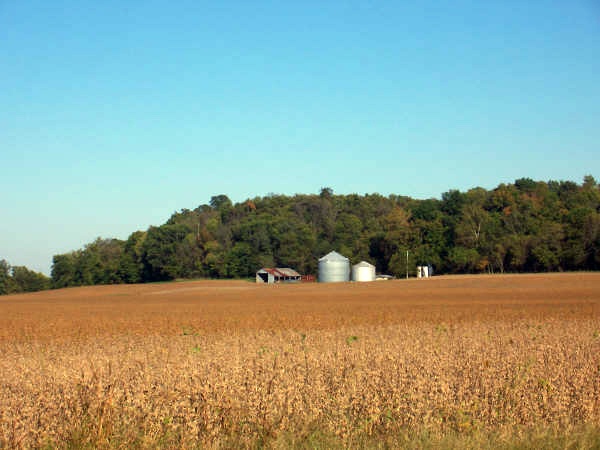 Close up, Slack Farm. Local folklore claims that the forested hill in background, and all the adjoining bottom land, is home to huge, bipedal 'Gorillas'. 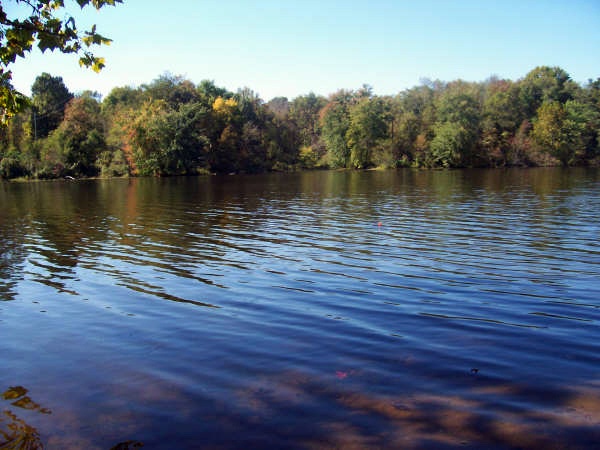 Woman has nightime BF sighting on Dike Rd. as it walks unhurriedly across road and disappears into the treeline which runs along the Ohio River. She described it as around 10 ft. tall, with long arms and covered with long, wooly hair. It was broad shouldered, narrower at the waist and had a gorilla like head with no neck. Her husband and son, commercial fisherman, had heard this creature many times previously as it splashed about in the shallow waters just off the shore of a large island in the river where they fished. Area has long history of BF activity.Interestingly, it is the site of the largest concentration of desecrated Native American burial mounds in the world and the largest known burial site in Kentucky. Over 1,200 graves, belonging to the Angel Medina culture,were desecrated and looted in the late 1980's. The crime garnered national attention and,consequently, massive protestations from Native Americans across the U.S.Hundreds of representatives soon descended, en mass, on the area to hold rituals as they reinterred their ancestors back into what they considered sacred land. In the late 1990's I was able to sneak into the area, known locally as The Slack Farm, and have a look around this magical place. Some stealth was required, since the grave desecrations, which resulted in the nations first lengthy prison terms for crimes against the indigenous dead, the area was highly restricted and tresspassers were promised immediate jail terms as well. Nonetheless, we were able to spend several hours unnoticed as we walked the far end of the ridge which sat below a large, forested hill. As we walked along a small creek which emptied into the Ohio we came upon the carcasses of about ten dead pigs. They were ripped to pieces and strewn over the entire lower end of the ridge. They appeared to be fresh, despite the curious absence of blood, and none of the meat looked as if it had been eaten. After this an extremely uncomfortable feeling came over us, like we were being watched, and we decided it would be best to leave.

"What I saw that Christmas Eve evening while traveling through the back roads of Sturgis...

It had patchy hair, mainly in patches on the shoulders and back, and it had a full tangled head of hair spreading around its neck and patches on it's upper chest also...no tail and no hair in the genital area.It was thin and lean. You could tell it had a big boned structure but the flesh was thin on it's body like it was unhealthy.The genital area looked like it had a rash or was being scratched on a regular basis as it was a pinkish color and it had large, hanging testicles with a thick uncircumcised appendage hanging loosely.When it did turn to run into the opposite field the buttocks were muscular as well, even though it was rather thin in stature. I would estimate it's height to be somewhere between 6'2 and 6'5, and around 145-150 in weight. I realize this is rather small to be classified as a Bigfoot, but maybe it had some sort of disease or malnutrition disorder. There were ribs showing, like it was starved...Also the area below around the hip area was slightly sunken in showing the pelvic bone structure.

Facial features: The face was sunken and shallow.It had a wide nose, like a person of African descent, a large lip area around the mouth, and the canines were a bit shorter(than the Beast of LBL's). I didn't notice any lower canines sticking up, and the face was gaunt, sunken in, the flesh sticking to the bone structure, the eyes were red but I'm sure that was from the headlights shining in it's face. It did have blood around it's mouth, on it's teeth, and running down it's chin and chest, and on it's hands and lower arms. The eyes shown fiery red, with no white around the pupils, just solid red, glowing in the light like a captured animal in the dark. Wild, very long brown hair fell from it's head in thick tangles along it's white skin, down it's back, over it's shoulder. It appeared to be a man, and it was naked, it's flesh as milky as the snow around it's bare feet that were raised up on the toes, as if preparing to pounce, it's back hunched over slightly. It's muscles were tight, solid outlines resembling finely chiseled Italian marble, no doubt they would have been hard to the touch, as well as cold. One of the upper leg muscles trembled like a horse's does after a hard race. It stood staring at me, through the windshield, I could see the exhales of breath, large clouds of warm air, coming from it's mouth in fast rhythms as it rested from running through the fields. The hair on the neck and shoulders was in patches, like hunks taken out all over, there were sprigs of long hair hanging from the elbows and along the backbone from the neck down to the butt crack. Its hair was dark brown.....and I don't know if you can add this but it had what appeared to be leaves stuck in it at places...it was a tangled mess, very unruly...and the straggles that hung long by the face were twisted with blood I assume at the ends." - Jan Thompson

During a quota deer hunt at the Higgins & Henry Wildlife Area just outside of Morganfield, two Indiana deer hunters encountered a bigfoot creature in woods. It scared the two so badly that they abandoned the hunt and returned to Indiana empty handed. (credit: Mike McCaw)