Nearest city? Traveling to Madison, IN from Eminence, KY

"I drive a route truck and make deliveries at night time and have ran this route for six and a half years total. I made a delivery at Norms Food World in Eminence, KY. I was traveling on 421 all the way to Madison Indiana across that little bridge on the Ohio River. It was around the mountainous part of 421 where the road winds back and forth with dangerous curves. I have the location stored in my GPS. I was doing 55 on cruise control like always, came around a corner and there he was standing next to a street sign. He was at least 8 feet tall totally covered in hair standing on the side of the road and when my super bright headlights shined on him his eyes reflected like a deer’s eyes in head lights. He was only like 2 to 3 feet off the side of the road. He just stood there and stared at me. He didn't run or anything, but he wasn't’t standing totally still. He looked like a man in the face, totally covered with hair, kind of reminded me of the wookie on star wars, except he had perfect chiseled abs and pectorals that you could see very well through his hair. This guy looked like he could easily lift a car over his head, almost had a gladiator type body build, but his arms hung all the way down past his knees. I saw this thing in detail and I got chills up my spine. It scared the crap out of me for the rest of the night. This thing was there, it was real. I saw it plain as day and if it were a man in costume then why did his eyes glow like a deer’s in headlights? Nobody believes my story, not even my family members, nor my father and they always say I must have been on drugs, but I assure you I was not hallucinating. I swear to God I saw this and I try not to tell the story to anyone anymore because I feel like an idiot afterwards. They look at me like I’m a nut job."

"8 feet tall covered in hair, six pack of abs and visible pecks, gladiator type build, his hands hung down a little past his knees, and he looked kind of like a bearded long hair hippy in the face, and his eyes reflected in my headlights."

Any additional Info? "It scared the crap out of me!"

I spoke to the witness over the phone. The excitement was evident in his voice even though it’s been four years since his sighting. It was a typical chance encounter, as he said he had just rounded a sharp corner when he noticed what he first thought was a “huge biker dude” standing next to a street sign. He promptly slowed his delivery truck down to about 15mph and starred at this creature for quite some time, taking in a tremendous amount of detail. It was on the passenger side of his truck, only a few feet off the road. His high beams lit it up nicely. Its entire body was covered in medium length, reddish-brown hair. The ab and pec muscles were very pronounced. “It looked like it worked out in a gym; it had a gladiator-type physique from a movie; it looked powerful enough to lift up a car!” The hair color and length was consistent across it body, even in his mid-section, yet he was amazed how you could see the muscular definition, even through the hair. The arms were very long, with the wrists coming below the knees. Its face was cover in hair with a 2-3 inch beard. The eyes nose and mouth were all proportionate to the head. "It looked like a Wookie from Star Wars." The eye shine was that of a deer or a dog, kind of greenish. It did not move, smirk or blink. The only movement was that of its arms which dangled slightly side to side. After getting a really good look and realizing this was not a human, he sped off quickly. For the rest of his trip he was extremely nervous, even wondering if this thing had possibly jumped on the back of his truck!

I visited the location and measured the school bus sign. The sign was exactly 8 feet tall and the witness said it stood over a half-head taller, placing the creature's height at 8 feet 6 inches. The estimated weight at this height would be approximately a half ton (1,000 lbs)! 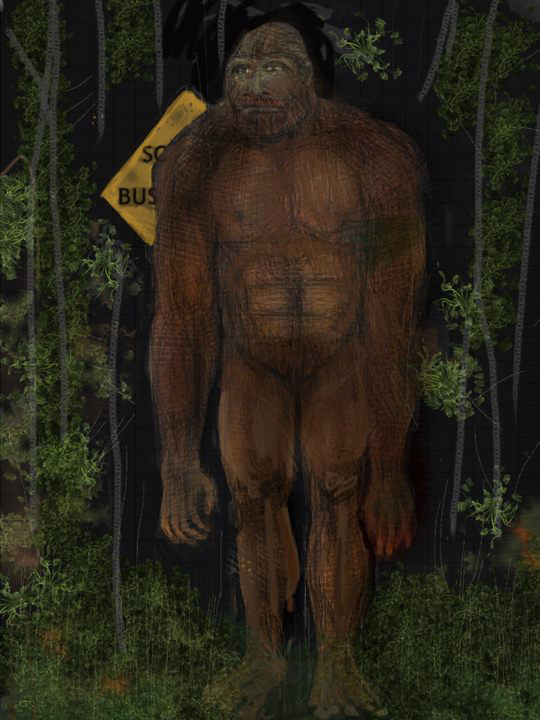 Sketch by Terry Thomas under the direction of the witness.


In 1962 local authorities hunted a Wildman in this exact area. See page 11 of this article: http://www.strangeark.com/crypto/Crypto3.pdf

On 4/12/2012 I was contacted by a homeowner in Bedford, KY. At 7:30am the homeowner, Rick (correct name on file), stated to me that around 5:00am that morning he heard what sounded like a howl, and heard something walking around the home. It was loud enough to wake him. Rick also stated he opened the back door and could smell a foul odor. At 6:00am Rick went outside to check on his home at which time he found a set of large footprints. Approximately 8:51am I arrived on site and after meeting with Rick at which time he told me the same exact statement as he told on the phone then Rick showed me the footprints. The footprints measured 14 1/2 in long, 5 1/2 in wide, with a stride of 54 3/4 in which puts the creature’s estimated height at around 7 1/2 feet. It appeared to be traveling northeast to the southwest. After investigating the path traveled it came upon the home and appeared to walk around said home and peered into the windows. Photos were taken and castings made of the prints. After talking to the witness and examining the evidence I believe Rick did indeed had an encounter.

Follow up on 04/13/2012. At approximately 4:00am I received a phone call from Rick at which time he seemed upset. Rick then stated that it’s back and just walked across the back deck. I informed Rick to calm down and stay in the house and that we were on our way. At approximately 5:00am, I and Monty, a fellow investigator, arrived and immediately began our search of the area. We found a fresh trail of more prints at which time we followed until we came to barrier of thorn bushes. It appeared the creature went through with ease. On the way back a trail cameras were placed and new castings made. I also talked with Rick about the incident. Rick stated it walked up on the back deck and crossed in two loud steps and played with the door. Rick then said he yell at it through the door and that’s when he heard the two loud steps the deck is 12 feet long 8 feet wide. For investigating purposes I made two long steps on the back deck at which time I came up short and I weigh 295 and I could not make the loud sound rick heard. This area is wooded, full of hollers and hills. The area where this encounter occurred is near Mount Pleasant which has a history of sightings. This investigation is ongoing.

Nearest Road: (Undetermined at this time. The witness may try to find the location for us.)

My dad and I were driving down some back roads one evening and I can't even remember where we were going, but I do remember it was just getting dark and it was just starting to sprinkle. I know I had my headlights on but it really wasn't that dark yet. We pulled up to a stop at a "T" intersection. Directly across the road we saw a Bigfoot and he was running up a small hill toward a row of trees. He was holding a small silver or gray rectangle box in his right arm like a football. As we pulled to the stop sign my lights were pointing towards him. He turned around and looked at us like it was nothing then just continued up the hill. We saw the Bigfoot very clearly. The Bigfoot continued out of sight and we continued down the road.

He was shaped just like a regular man. He ran just like man but had long strides like a professional runner. He was hairy all over. The hair was just a regular brown, maybe with a tint of red. He had on no shoes or clothes just hair. The thing I remember most is that he just looked like a hairy really in shape human with a bubble butt. I would estimate him to be between 61/2 to 7 ft. tall.

I spoke to Lisa, the eyewitness, over the phone today. She sounded to be a very sincere and credible 35 year old housewife from Carrollton. She said her sighting occurring about 5 years ago while driving with her father in the city of Bedford. They came to a 4-way intersection in a rural area. It was dusk, but not dark. She had just turned the headlights on and there was a light rainfall. Directly across the road, in front of their vehicle, about 35 yards away, they noticed a 6 ½ - 7 foot tall, hairy, bi-pedal creature running up the hill side. Although she had turned the headlights on, it was still light enough to see clearly. The headlights did not reflect on the creature and it was running left to right away from them. It had brown, short fur with a reddish tint. Muscular in shape, the shoulders were wide and the neck was thick. It had a very large “bubble butt.” The head seemed rounded rather than pointed. The arms were very long with the elbows coming to its waist. It was taking long strides up the hill and it looked like it was running on its toes. It turned its head to look at them however it did not twist the upper torso or shoulders when doing so, but only pivoted the head just enough so that its chin was over its right shoulder. The most notable thing about this sighting was the creature appeared to be carrying a large rectangular-shaped object tucked under its right arm, similar in fashion to a football player carrying a football. The object was not necessary shiny. She estimates the size and shape of the object to that of an “old large bible.” As the creature vanished into the woods they drove off and never thought about reporting their encounter. Lisa shared with me an interesting emotion she experienced after the sighting occurred; she said, "this thought ran across my mind, the world isn't’t how we know it.” Lisa decided to report her encounter after seeing a recent report from Trimble County on this site.