Your first name: Dennis, reporting for my father

How many witnesses? one

It was my father who was out hunting in the woods behind our house. It was roughly about 3 pm and it was hot so he sat down on a rock in the clearing under some power lines. Because there was some what a breeze blowing up the valley and the woods were hot and muggy. He told me he sat there for about 4 min. Just looking down the valley when he seen something coming out into the clearing about 150 yards away. He said he thought it was a deer because of the color and size. But then it stood up and took off walking on two legs across the clearing. Dad said he froze with emotions at what he was seeing. He claimed that it took maybe 2 or 3 strides to cross the 50 ft clearing. It wasn't in a hurry, but just like it was on cruise control. When it reached the other side he said it just disappeared as fast as it appeared.

It was covered with dirty blonde hair and was taller than he was by at least a foot. It wasn't in a hurry and apparently looked before crossing and had a huge stride in it's walk.

I was hiking with dad and my two older bothers close to that spot prior and found a footprint near a spring. And about a year after that my brothers and I were playing in the woods by our house and we heard a deep scream that sounded like a human with a deep voice mixed with a wolf howl. We ran out fast and wouldn't go back without our dad. 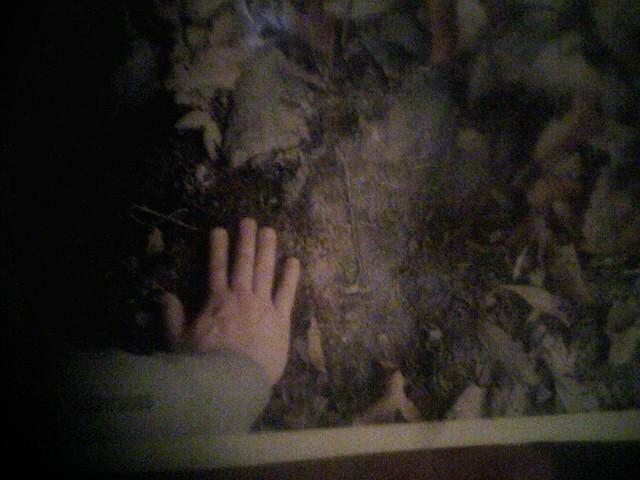 Photo of another print taken with a cell phone in Jan 2009.

Dennis asked his father for permission for me to contact him. Frank (the father) was very humble and nonchalant is his recollection of what happened that hot summer afternoon, almost 10 years ago. He said he was actually enjoying an afternoon riding his horse, not hunting on this particular occasion. After tying up his horse to a bush, he sat on a rock to admire the beautiful wilderness. It was a clear, hot day. Directly across from him on a neighboring hillside, approximately "2,000-2,500 feet" in a clearing under some power lines; he catches a glimpse of a large hairy creature running on two legs. It had long grayish-white hair with "some brown in it". The sighting only lasted 2 seconds, as it ran into the tree line. At first he thought it was a deer. He states, "it was definitely on two legs". Trying to rationalize what he witnessed, he summed it up to a deer. However, it was odd enough to tell his wife and kids when he returned home.