Wayne, a 47 year old gentleman from New Haven, was on his property removing some old bushes when heard a weird holler--a holler which he has never heard before. He was bent over pulling bushes when he heard the first holler. He thought to himself, "gee, that's odd", but kept pulling bushes. Then a few seconds later it hollered again. At this point Wayne stopped pulling bushes, stood straight up and looked in the direction of the odd vocalization. Approximately 50 yards from his location a black animal on all fours stood there looking directly at him. It was waste high, with very broad shoulders and a flat face with no protruding muzzle! Not having a muzzle is significant because it rules out a dog or bear. Just then it took off at a very high rate of speed running towards his location! It was galloping on all fours and it had long 2-3’ black hair which could clearly be seen bouncing up and down with each gallop. Its head was round with much shorter hair on the face. It galloped like a monkey would if it was running on all fours, with the front two legs extending forward together, then the rear two legs coming forward. The front shoulders were also significantly higher than the hind quarter. The front legs appeared to be arms and the back legs were much thicker which appeared to connected to a hip. No tail or ears were noticed. He estimates its height while running to be about 3 feet and its weight around 250 lbs. Wayne couldn't recall if it was running on knuckes (hands) or feet. It actually ran diagonally within 20 yards of Wayne and ran into to an opening in a thicket. It could be heard breaking large branches. Wayne believes the creature was angry at him for being so close to its home. The next day Wayne left a banana inside the thicket. The following day he returned to check on the banana. It was eaten and pealed like a human would peal a banana, not torn apart. While inspecting the area around banana peal Wayne noticed 4-5 piles of odd looking feces. Each pile was 2-3” long, thick and tubular. One pile was fresh so he collected it and placed it in his freezer (in a tightly sealed Ziploc of course). I met Wayne in person and collected the feces to be sent for analysis. Perhaps the feces will confirm my hunch that this creature is a juvenile squatch, or possibly a full grown monkey.

MYSTERIOUS ANIMAL AS SEEN BY HARRY SMITH ON THE SALT RIVER:

'Smith and Tom Hardman were fishing on a creek known as Dutchman Creek, twenty three miles east of Louisville,Ky. which empties into the Salt River. This fishing tour was in the night. After fishing for some time, a terrible noise was heard like distant thunder, seemed to attract their attention, rocks and pebbles could be heard tumbling down the bank. The earth trembled, and looking down the creek from the bridge, they discerned a huge animal resembling a dog. It was spotted and about eight feet in length, and four feet high; coming up to them on the bridge. The animal had no head or tail, and nothing seemed to stop it in its course. On went this mysterious animal up the creek, rocks were heard tumbling a mile away. This mysterious phenomenon was, and is to this day, a wonderful mystery to Smith. As he never could account for its appearance. He being a man of great nerve it did not frighten him as it would many others.'

Everything about this early sighting hints at a possible Bigfoot walking on all fours except the note about the apparent absence of the head.Since it was dark at the time of the sighting it is possible that the head was simply in such a position as to render it unnoticeable. Furthermore,as it was described as being 8 ft. long and 4 ft. high, the chances of any type of canine identification for this animal seems very unlikely. Smith, a runaway slave, might be forgiven for comparing this creature to one with which he was more familiar with.

(source: 50 years of Slavery in the United States by Harry Smith)

The hills and hollows of Nelson County where this incident took place are normally peaceful spots where farmers nestle tobacco and corn against the ridges, and cattle graze the gentle slopes rising from the creek beds. Coon hunters pick their way through the wood and step lightly across fences here and the crisp autumn nights are usually filled with nothing more fearsome than screech owls, or an occasional fox. It was on such a night in October 1965, that two brothers saw something which they've never forgotten. One says he doesn't tell the incident to many people any more. "They just laugh and call you crazy", he says but our eyes didn't fool us, and neither of them will deny it ever happened. While their father and mother attending a school fall festival that evening, the boys had been instructed to go the their grandmother's farm and find a cow which was expected to have a calf. It was not quite dark, and we'd taken the pickup truck to the back field as far as we could drive, he remembered. The parked the truck and headed up a fence row to a clump of trees where the cattle usually bedded night "As we moved up the fence row spotted something in sort of hunched position. There were a lot of buck bushes growing around the field and we couldn't see too well. We didn't think it was a cow but we didn't know what else it could be." About 100 feet away from the object their dog started barking uncontrollably, then the animal backed off and would not follow the boys any closer. They were no more 50 feet away from it now. All of a sudden the creature raised up two legs and began running away from them . It stopped under an arch formed by two trees and for a moment faced its pursuers. The brown hair covered body stretched seven to eight feet tall. The brothers aimed their flashlights at it once and caught a glowing red reflection from its eyes. "We couldn't have watched it for more than a few seconds, than we both ran off scared to death. I turned once to see if was chasing us and I saw the creature put its hand on a fence post and just flip over into the next field." The next day wen their father went out to the field to check their wild story, he found a path through a field of uncut oats in the exact spot where the boys claimed their "monster" jumped the fence. They never saw the creature again, though once that same year, their mother and sisters heard an unusual noise in the barn. That summer another unexplained incident happened . In a certain corner of their garden something would eat the corn as fast as it came on the stalk. In 1965 few people had ever heard of "bigfoot", but several years later when one of boys was in college he accidentally ran across the account of several "bigfoot" sightings in the northwest. Ever since I've never doubted that's what we saw that night," he says "We didn't know what a bigfoot was, so we called it a "Whortlechourt'." I read everything I can about them (bigfoot) now, and almost every account that I've read seems to match up with ours." Through his reading he has also learned that bigfoot are believed to be vegetarians and very shy of people and other animals "I don't think I'm scared of it, but I never go up in that field at night without thinking an awful lot abut what I saw." I believe God created the world through evolution, and maybe what I saw is the "missing link" between man and apes."
(credit: Rick Carter) 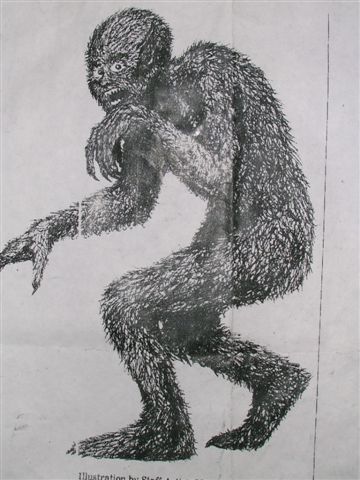