Estimated time: An hour before dusk.

Length of time: Seconds as she past it.

I spoke to the witness over the phone on 6-27-15. Her boyfriend encouraged her to contact us after seeing another report posted online in this same area. She’s never shared her story publicly until now.

One afternoon after finishing a job, Valory drove west on the Western Kentucky Parkway searching for a motel. She was in the left lane doing the speed limit (about 70 mph). In the distance she observed someone or something tall and upright cross the highway. She thought it was odd because there were no stranded cars near this individual. This is a very remote area. As she approached this “individual” it was now walking at a high rate of speed on the right side of the highway in the grass. It had crossed the highway diagonally, from left to right, but a little in her direction, and it was now headed for the tree line. “It had on no clothes and it was definitely not a person, and not a bear,” explained Valory. It was all one color, covered in cinnamon-brown hair. Valory estimated its height at about 9 foot with wide shoulders and she said, “It had very robust features. It looked more human than ape, kinda like a very well-built man.” The arms swung low, well past its waist and it had a very long stride. She explained, “the hair was the length of a Collie, but matted, raggedy and thinly spaced.” She could see the skin in places. Valory never slowed her vehicle down as she passed it. The creature never looked at her. She basically saw its profile as she passed it and could not recall seeing any specific details of the face other than it was about the same color as the hair and it was “kinda square in shape.” She drove past it pretty quickly and it was estimated at about 20 yards from the vehicle on the right. 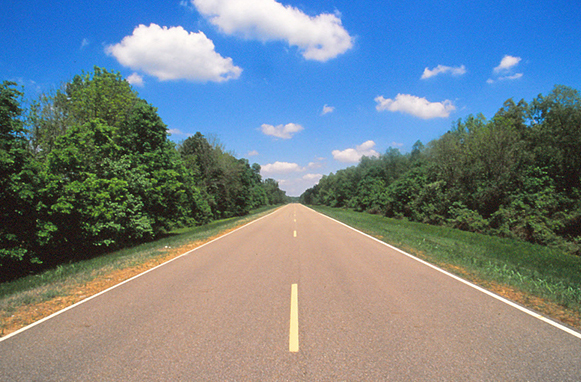 Area similar to where it crossed.

Witness Description of Event:
“I was in the woods on my father's property where he also lives. I have hunted and camped in these woods most all of my life. On Thursday, December 5th 2013 in the late evening hours I walked into the woods just to listen and watch for deer and see just where they were moving or bedding down so I could plan a bow hunt real soon. As I stood very still and listened I began to hear something moving in my direction from back in the deeper woods (to the North) which is near an old slough/wetlands area. As it got closer it was being very loud, crashing through the brush, snapping limbs and shaking bushes as it moved. It sounded BIG. It was headed straight towards my position, and then it began to veer off to my right (Eastward). I stood very quietly and listened as it moved around me and into a cedar thicket, tearing limbs and crashing through the area like a dozer, then all of a sudden it stopped. I immediately left the area and went and told my father, he wanted us to go back and look around, so we did. As we entered the cedar thicket where I last heard it we found several limbs and small trees broken or snapped. Also we came upon a place on some deer trails where a huge circular spot had been wallowed out, it had been swept, or raked clean of all leaves and cedar and pine needles, the bottom of it was bare ground. There had been an attempt to build a small structure that encompassed many small sticks (as round as your thumb) hung across the deer trails horizontally, and then many cedar limbs (still full of needles) hanging over the sticks in a vertical position. This made a shoddy sort of wall to this enclosure. My father is almost 70 years old and he said he had never seen anything like it before, and neither have I. We decided to make this report.

(NOTE : Between the time the report was given and I arrived on scene to investigate, we had experienced a winter storm which included ice and snow, this destroyed some of the evidence.)

I met both the witness (39 years old) and his father on Wednesday 12/11/13 at 10:00 am. They both relayed the story to me again and then we went to the exact location about 600 yards into the woods. The witness took me to where he was standing, and then step by step walked me through each sound and movement he heard. We then went into the cedar thicket where the small structure had been but found that the winter storm had severely destroyed the structure. (NOTE: Even as we were standing in the woods on this day, huge pieces of ice were falling on us from the overhanging limbs. I suspect this Ice falling is what destroyed the structure). It was plain to see the bare circular spot on the ground and also see where pieces of the walls had been. I could easily picture how the structure might have appeared to them a few days beforehand. There were 3 deer trails coming into a junction at this point. The stick walls and the circular bare spot of ground was at the intersection of these 3 deer trails. I got the impression this was either a place to hide and surprise passing game, or an attempt to temporarily get out of the cold by squatting. I say this because it was not big enough to house a Bigfoot of any size, or to have a Bigfoot lay down inside it.

I found many broken and snapped limbs and small trees, bent over trees of larger size, and some tree markers. This location is extremely hard to get into unless you enter from the fathers home in front. The back boundary of this property, along its Northern side, is the Western Kentucky Parkway. It is illegal to park a vehicle on this parkway. To the West is a very large Swamp/Slough/Wetlands area almost impassable by a human. That is the direction the huge moving subject came from.
I am very convinced that this man heard a possible Bigfoot making its way across this property. It either did not know he was there, and so it was moving along without stealth, or it knew he was present and so tried to intimidate him to leave by making this noisy, and destructive entrance.

This area is known as the Pond River bottoms. It is miles and miles of thick old uncut timber, swamp land, and an occasional Coal Strip mine areas that have been abandoned for over 25 years. There has a long history of Bigfoot sightings in these bottoms. There have been reports turned in to the KBRO and the BFRO of sightings within a 4 mile radius of this incident location. Researchers from both the KBRO and the BFRO have done investigations in this area, and had results. I also learned from the Father who is also the owner of this piece of land where this sighting report happened, that 40 years ago he had 2 encounters with what he know believes was a Bigfoot in this exact same area. His stories are amazing and mind blowing in their own rights.

In September of 2011, I was within 2 miles of this sighting location doing some research on my own. I was accompanied by my wife on that particular night. At 10:30 PM I did a series of tree knocks and immediately got a distant response (3 knocks). After 5 minutes I did another series of knocks and got another 3 return knocks, only closer and much louder. I had a Louisville slugger baseball bat, “IT” sounded like it had fence post. After 5 more minutes I did one last knock and immediately got a single huge smashing return knock that sounded like it broke whatever club it was using It was CLOSE. My wife and I both left. That night my wife became a 100% believer in Bigfoot.

This is where the witness was standing when he heard the loud crashing sound.