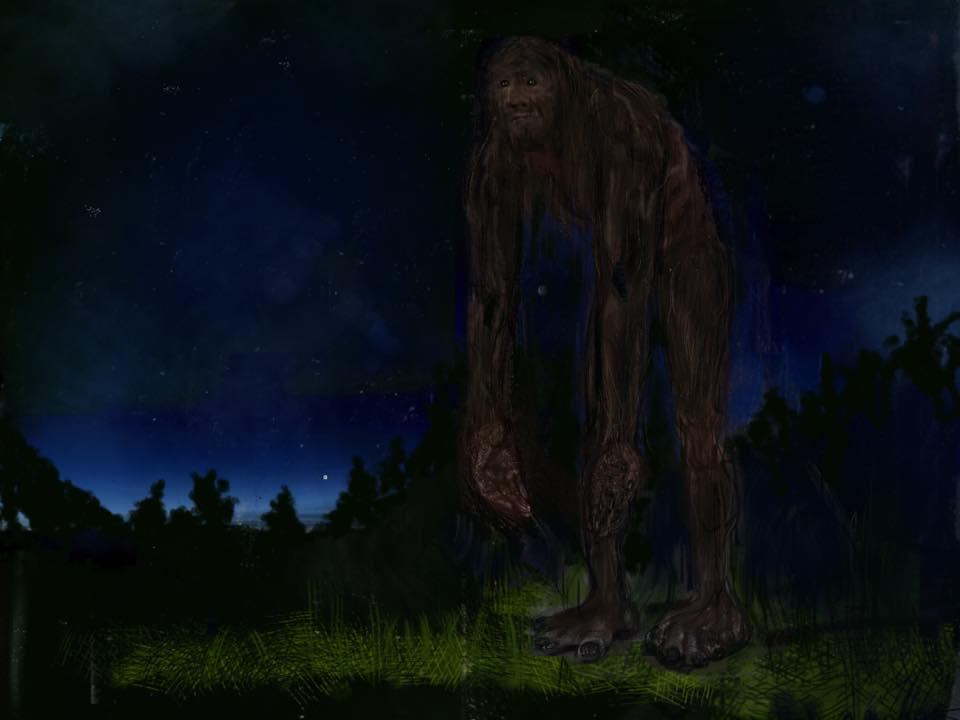 One evening around 10:00pm her dogs began barking frantically. Debbie grabbed her rifle and walked out onto the front porch. Within 30 yards from the porch see observed a very strange creature. It was standing just at the edge of the porch light so they could see each other pretty clearly. She said they locked eyes. It had long, stringy brown hair covering its entire body. It stood only about 5 foot tall, hunched over. “It reminded me of a frail, old man,but it was without a doubt an animal,” explained Debbie. The eyes were black and normal in size for the size of the head. When I asked her questions regarding other facial features (such as the nose or mouth), Debbie explained, “I really don’t remember what the nose or mouth looked like. All I could remember were it’s eyes. Although It did have long hair all around the sides of its face.” The overall body shape and extremities seemed proportionate to a thin, old man. Debbie said she absolutely froze and could not shoot it. After only a few seconds, she quickly turned and ran back in the house. She did not call the police because it was an animal. The next day some possible tracks were noticed but the ground was very hard so there were not distinct impressions.

Debbie said the sighting only lasted a few seconds and her overall impression was either a sick (or old) frail, hairy, upright animal. She still lives in this very same house and she explained she does not feel threaten to walk out in her yard, almost like she feels protected. I explained the method of gifting and suggested she try it. She agreed and will keep me posted. I also explained the area has had a long history of Bigfoot reports which intrigued her.

Note: This report was obtained on November 21, 2015. I went camping & hiking (squatchin') with some friends and when I went to reserve a primitive campsite (in person) with a park ranger, she told me about "her" possible Bigfoot encounter! She spent almost 30 minutes sharing her story as I stood in line. Actually not a soul was behind me due to the early morning hour and primitive reservations are not popular in 30 below conditions. A few years ago most people would snicker when I shared my passion with them. Today many take it serious.