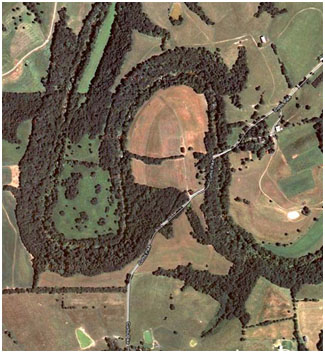 Doug Biggs and 5 others, 2 boys and 4 men total, were coon hunting near Silver Creek when the coon hounds started acting very strange. The dogs would not go out and kept looking in the direction of a tree line about 100 yards away. Doug Biggs was the person who was using the spotlight that night. As the dogs acted strangely and refused to leave the owners. Doug heard something walking in the darkness. Doug stated that the steps sounded long and heavy and he was not sure what was taking these steps. And whatever it was making a sound as it moved like a whoof whoof sound as it moved along. Suddenly the group heard something behind them and Doug turned and shined the light in the direction of the sound and his light hit something standing beside a large oak tree. Doug said at first he thought it was a huge gorilla but this creature was so big he just did not think it was a gorilla. The creature was dark in color and approximately 8 feet tall. The creature jumped behind the tree when Doug shined the light on the creature but Doug and several of the others saw it clearly. The creature then went down into Silver Creek and was pulling down huge limbs as it went and making the above mentioned sound only louder. Once near the creek it started picking up huge rocks and hurling them, Doug said he could not believe the sounds as there was no doubt that the rocks being thrown were huge. The men knew the area extremely well and knew that whatever this was had only a few ways out. Doug directed the men to move up the hill as the creature had to move in that direction to escape unless it went over a cliff side which would have resulted in death. The placement of people made the creature move into an area where Doug got his second view and this time the creature was closer. Doug said the creature had black hair and smelled like an old wet horse. Doug said it was a strong smell and comparing the smell to a wet horse was all he could think of in comparison. When his light hit the face the eye shine was red. The face sloped down at an angle and the brow protruded over the eyes. Doug stated the creature was walking extremely fast but not running and the speed with which it walked was just amazing. Doug said that at that time in his life he was a very fast runner but he does not believe he would have had a chance of catching the creature running as hard as he could as the walk was just so fast. The creature finally made it to an area where it had access to heavy cover and vanished into the night but the 6 stood and listened as it moved away and when it would cross the creek it sounded like a horse running through the water. Doug went back to the area a few days later and saw the tree limbs and had a hard time trying to rationalize that anything could rip tree limbs off a healthy tree with some of the limbs being about ten feet long and the size of a man's thigh. He found One week before this sighting Doug and his brother in law were coming out of Silver Creek when his brother and law spotted a large track in the mud. The track was not extremely large, maybe 14 inches in length, but the track was very wide and the toes were distinct. Several years before this sighting Doug Biggs was in the Round Hill Store and was talking about hunting back in the area where he and the others would have this sighting in a few years. An elderly man in the store overheard Doug talking about where he hunters and he turned to Doug and said "You better watch out back there, there is something big back in there". Apparently the elderly man knew what he was talking about.