Witness Josey and her son have experienced mysterious activity at their Tiline home for almost two years which includes a trackway of abnormally large footprints, screams in the night, red eyeshine, a strange hair and obnoxious smells. In October 2010, late one evening Josey was chaining-up one of her dogs in her backyard. As she was hooking up her dog she experienced the sensation of being watched. As she looked up, she sees a dark silhouette of a massive, hairy figure about 40 yards away, standing in the shadows, just beyond the security light of the yard. Her son and nephew also noticed the figure. At this moment her other dog, not chained, “who’s not afraid of anything”, also sees the figure and walks towards it. The dog did not growl, did not whimper, it simply walked towards the figure, then turned around and walked back and sat by Josey. The mysterious hairy figure continued to stand in the shadows quietly and motionless, not reacting to the dog’s approach, nor the witnesses. Frightened, Josey, her son and nephew retreated to the safety of the house.

Josey experienced another significant incident when her son saw red eyeshine behind the house while using a flashlight. It was approximately 3 feet above the ground. As they are watching it intently, it suddenly rises up to almost 8 feet above the ground. The distance between each eye was estimated at about 5 inches apart. After a few more seconds, it then vanishes. Eyeshine was noticed on other multiple occasions. When I asked Josey if she noticed eyeshine during the October encounter, she said “no, there was no eyeshine”. This is significant regarding the witness' credibility as she did not embellish her story when prompted. 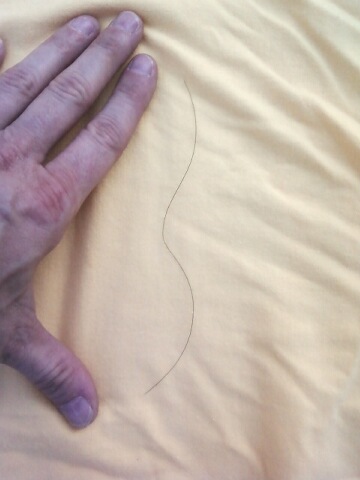 Course hair found in swimming pool. It's not the color or length
of anyone in the family or the dogs. 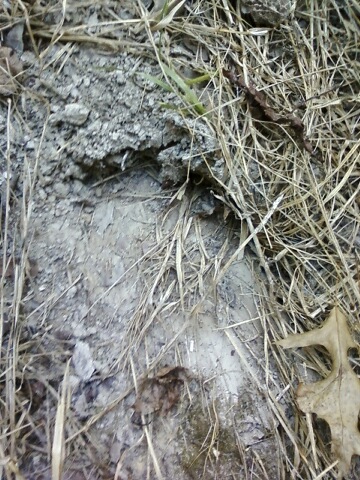 One of the many footprints found which includes visible toes.
Better footprints were found earlier on, but the witness didn't have
a suitable camera. I encouraged her to take pictures of the
entire trackway, and to place an item next to the print as a
size reference.

Reports of 'dog-faced', or, 'muzzled' bigfeet have been reported sporadically from around the country and they certainly are no strangers to the Bluegrass state as well.They are almost always described as looking, sometimes superficially, sometimes not, like 'Werewolves' and they often fit the folkloric description of this mythical creature in more ways than one. A commonly reported theme in many 'Dog Man' reports is its fearlessly aggressive behavior toward both humans and animals. Witness Jan Thomson, and two of her cousins, experienced this aggression one day during summer vacation at their home near Ky Lake.

When I contacted Miss Thompson she was able to offer even more details concerning the physical description of the terrifying beast:

"...the beast I saw at my cousins house resembled more of a bigfoot, except for the pointed ears and longer snout and claws that it had...kind of a cross between the werewolf and bigfoot....The nose....it had wider nostrils at the tip, more human like coming down from the bridge of the nose and was hairy...and it was either the thing did not have a neck or that it blended in with the tall head...(It had a) tall head, wide shoulders, thick chest...no muscle definition that I could see, mostly hairy,but there was a slight curvature to the calf muscles...thick legs....big, round eyes...long teeth and wide mouth...big head....no muscles showing on chest but had a bombastically large top heavy chest. The ears were laid down towards the back not standing up, like a dog's does when they are agitated or angry. The nose didn't appear to be a glossy black nose like a canine, but part of the facial skin....the teeth between the long canines were large and square, top and bottom. There was short hair around the muzzle and facial features and then it got longer and straggly... especially in the chin area also. The lips were more of a black smooth outline with no curvature on top like the muzzle of a dog where it meets the end of the nose."

Under witness' direction, and much effort via trial and error, I was able to render this detailed sketch of the Beast of LBL:

Miss Thompson also claims to have witnessed this creature, or others similar to it, on several more occasions in the general area (see other new reports) and has extensive knowledge of local folklore and events, one of which was extremely disturbing and involved the gruesome killings of a vacationing family in the LBL area in the early 1980's.

4' tall white BF seen crossing road holding its arms straight out in front of it in a weird manner.