Length of sighting: 1 minute or so

“We have been having trouble with raccoons and opossums killing our chickens and attacking the cat. I set up a sniper position on top of my trailer so that I could have a clean shot where I had my bait sitting. Around 2:00am an opossum came around for the food so I shot it. Instead of climbing down I stayed on the roof and just let it lie on the grass. I was still hunting the raccoon because it killed several of our chickens and I knew it would come around sooner or later. Right around 3:10am I heard leaves crackling and twigs breaking in the back of the property. It's very dark back there and you can't see anything without a flashlight, so I thought maybe it was a deer walking around. Just a few minutes later I heard footsteps coming down the walkway near where I shot the opossum. When I looked down I saw a very dark figure crouched down by the car looking at my kill from earlier. It was hairy, tall and slim. It stayed in a high crouching position, looked down the driveway and towards the back of the house then took two steps across the sidewalk, grabbed the opossum like a football then took two steps back to the car. It had no idea that I was on top of the trailer. I was in such a state of shock that I didn't move a muscle. From there it began to stand up slowly and walk down the sidewalk towards the rear of the property. I could hear the footsteps crackling in the darkness for the next few minutes so I stayed in my position for at least 45 minutes without even clearing my throat. I didn't feel threatened or anything, because it didn't know I was up there. I'm not sure how things would have gone down if I made my presence known."

I spoke to the witness and great length over the phone and we exchanged many text messages. Daniel is 46 years old, highly intelligent and very well-spoken. It’s easy to tell someone’s intelligence from a lengthy phone conversation.

Daniel was sick and tired of the raccoons and opossums making a mess their garbage, constantly digging under the wall of the chicken coop (recently killed four baby chicks) and they have lost cats in the past. Daniel placed food on the sidewalk and took his position on top of a camping trailer. After he shot the opossum, he said it was about 15 minutes before he heard the footsteps behind his property. He’s property is very heavily wooded and the carport sits under the light pole so it’s very dark with many shadows. Daniel believes the creature might of been a juvenile. It was thin, very black (“shadowy”) and its height was estimated at a little over six foot tall. The height was determined due to a yellow sticker on the light pole which is at about six foot, as it walked right by the pole. Daniel also believes the creature acted like it knew where it was going, like it had been there before due to how it stopped and squatted by the car, how it looked around, then walked over, grabbed the opossum with one hand, then returned to the back of the property.

When I asked Daniel if he could make out specific details of creature, he said, “No, it was all black, like a big hairy shadow.” Although only 35 feet from his position, it’s a very dark area, even with the outside security light (see pictures). I said how come you didn’t shoot it? He said, “It had no idea I was up there, I felt vulnerable with no place to go, and I only had a .22 bolt action rifle.” I also asked Daniel if he had been drinking and he said, “No, I don’t drink or do drugs.” The next morning he said he went outside to check things out during the day and it took him three steps to cross the sidewalk.

Upon my request, Daniel was gracious enough to take photos for us: 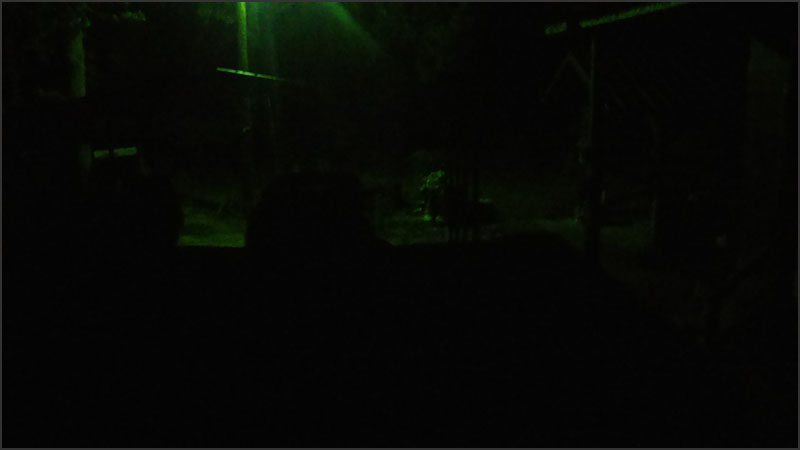 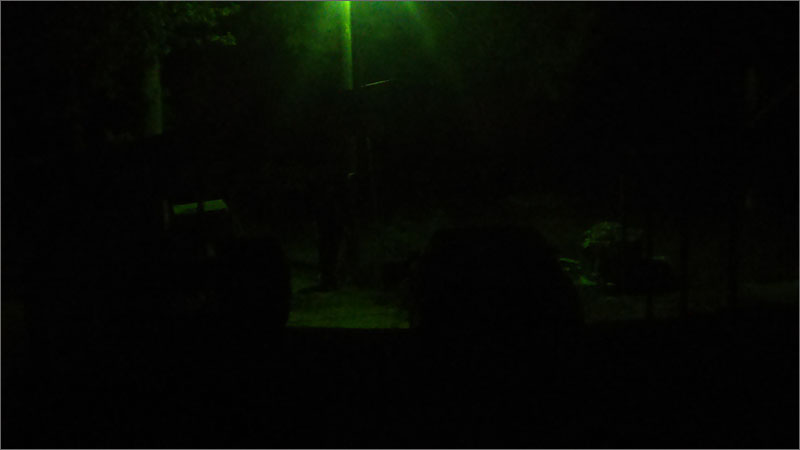 Pic # 2 - Daniel's view from the top of the trailer. Notice his brother standing under the light pole? 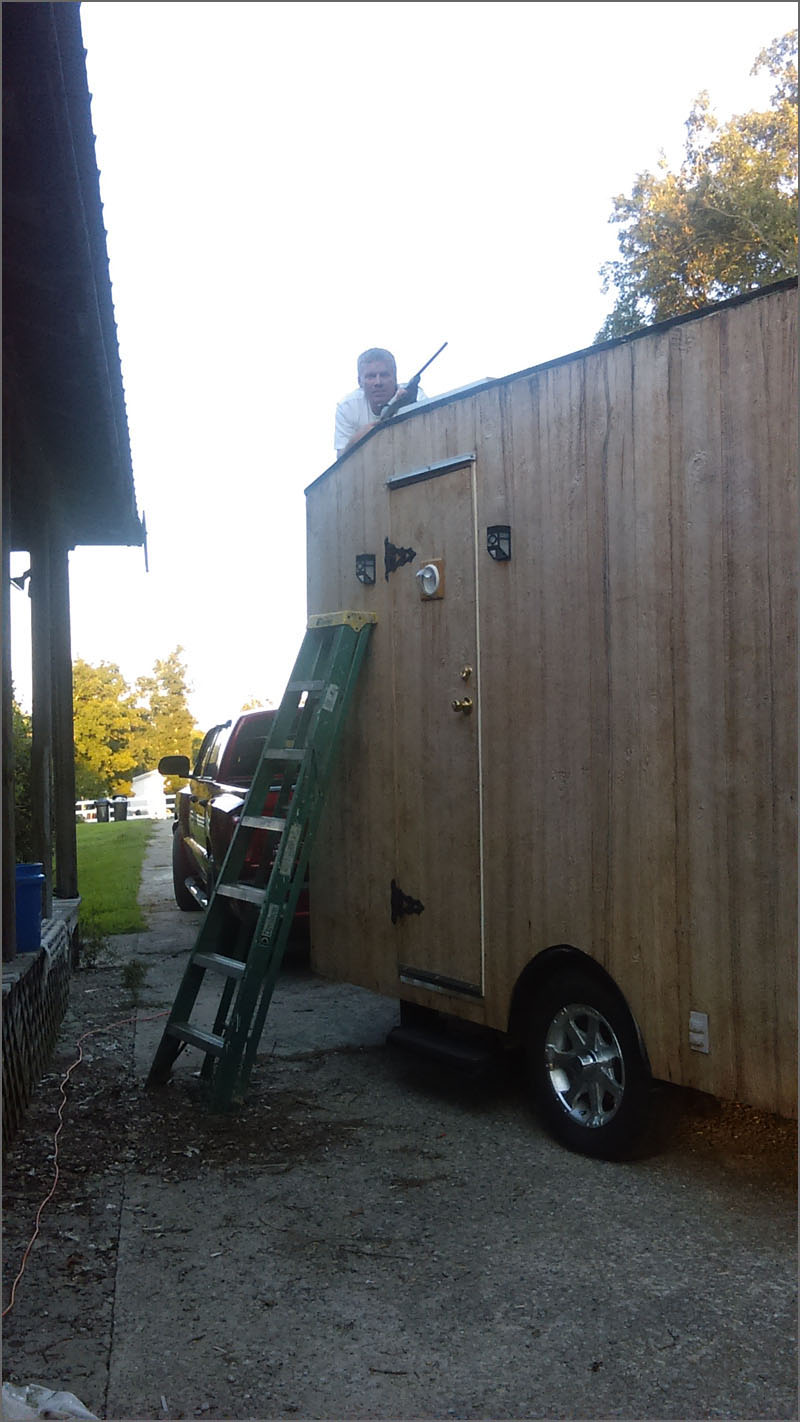 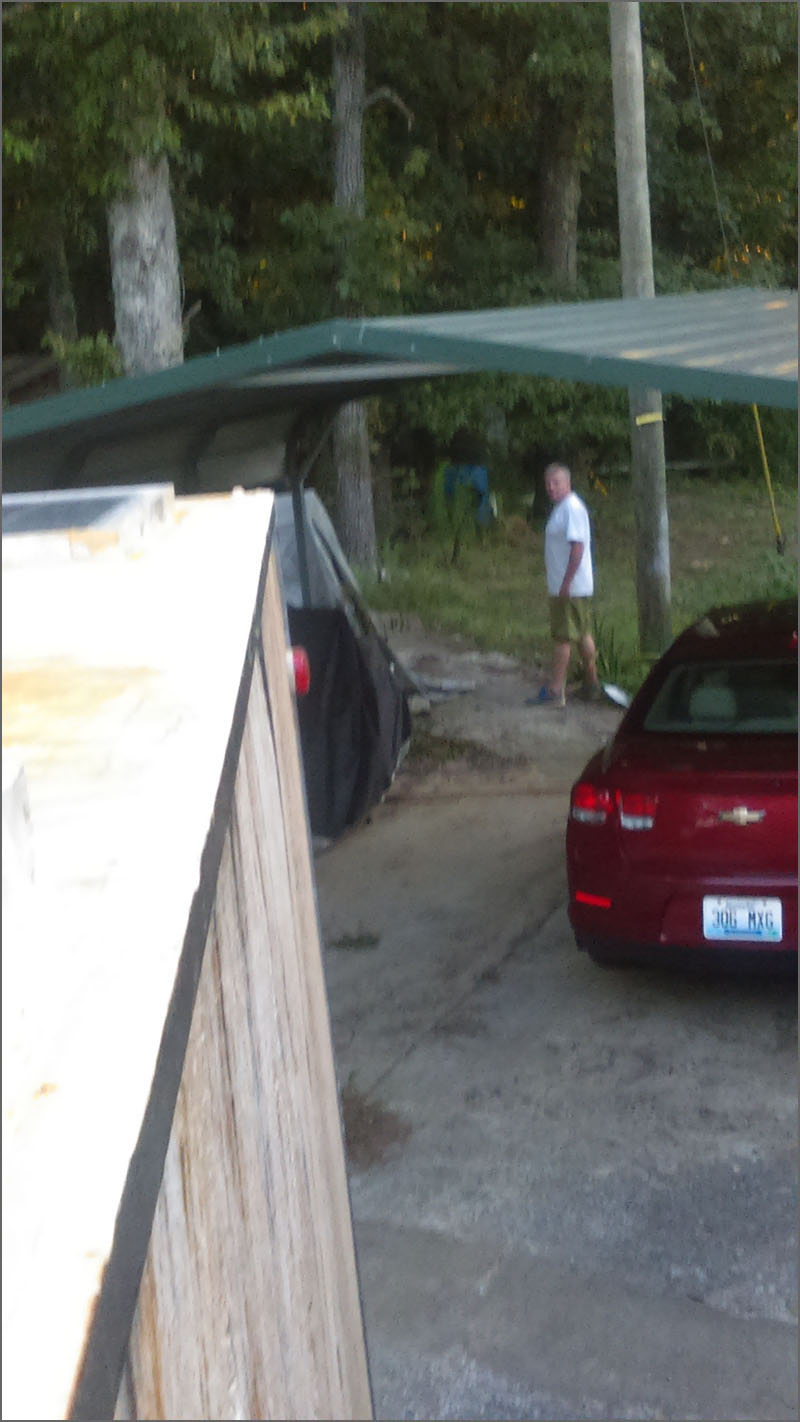 
Submit Your Sighting | Contact Us | Return To Kentucky Bigfoot