1. Your first name::
'Dawn'
2. Which county? :
'Boyd'
3. Estimated date? :
'aug 94'
4. Estimated time? :
'12:30a to 1am'
5. What city, or nearest city? :
'ashland'
6. Length of time the encounter lasted::
'1 min'
7. How many witnesses?:
'2'
8. Please describe your encounter::
'I will always remember this because It still sends shivers up my spine. My boyfriend and I was driving to his house from mine and we were on 1-68. This was when 168 was had no homes built and no streetlights as it does now. I was talking to my boyfriend when I noticed he was really quiet and slowed down. Did you see that? He said. I said see what? He hit his brake lights and when I turned around and looked out the back window, I saw 7 to 8ft shadow form the lights looking at us while he was crossing the road. I was terrified and he hit the gas and we were gone. I know what we saw and it was a bigfoot.'
9. Describe the creature with detail::
'7 to 8 ft dark brown to black hair all over body'

Please describe your encounter: My son and I were walking in the woods off the country road know as Greenfield Road which connects to Shopes Creek and Hurricane Hollow. We had recently discovered some tree breaks and teepees in that area. As we walked my son (who is 5) pointed and said, "Daddy there is bigfoot." I said, "where" as he pointed to a location about 50 yards above us on the ridge. There was a bigfoot creature standing at the top of this ridge. It acknowledged that we were there with a grunt. It then proceeded to break in half a small tree and began hitting a larger tree with a stick. We stood there frozen and not wanting to leave because we live for this. It then began walking toward us and it let out a lour moan/scream and grunted. I felt then that we had wore out our presence and I took my son and slowly walked away. We there there maybe 5 minutes at the most.

Every time I see a Bigfoot I just freeze up and can't help but to admire their enormous size; and yet see the gentleness they portray.

Describe the creature with detail: At least 7 1/2 feet tall; approx 350 to 400 pounds. Covered in black hair. It was dark and my flashlight didn't grant me the ability to see its face. It did have a distinct odor to it, an outdoor odor.

What city, or nearest city? catlettsburg

Please describe your encounter: while i was sleeping my wife woke me up, and said that something was outside the window in our bedroom, i was asleep and didnt hear anything, but many times i have been woke up hearing something walking around the house, but this night it happened to slip on a pepsi can outside my bedroom window, which turns out to be what my wife heard. we keep the bedroom window shut most of the time but that night it was really stuffy in the bedroom so i crzcked the window open about 8 inches to let some air in. my wife was awake watching t.v. and i think that it just happened to be close to the front of the house and heard the t.v on and the window is never open so it just came up to see what it was or what was going on, well it did slip on a pepsi can, and i told my wife to stay away from the window till i got to it so i could look outside the window and see if their was any sign of it. i couldnt see the thing that she heard. and closed the window, and locked it. the next morning we had a hard freeze on so the ground was frozen. and i went outside to work in my garage, and seen a footprint that i know was not any known animal that i have ever hunted or encountered, i took about 10 pictures of the foot print, some with the pepsi can beside it, some with a quarter inside it, and 1 with my foot beside it to show size, if you guys are interested in seeing any or all of these pics let me know i would be happy to send them to you 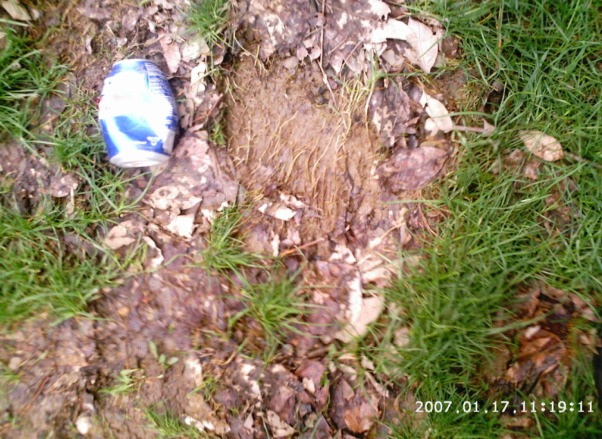 Two witnesses had gone out one night in order to investigate a supposed haunted bridge in an isolated hilly area. As they looked around the area they heard rustling sounds coming from the woods about 50 yards away. They thought it was a deer so they decided to walk to a nearby abandoned barn to see what was in it. Suddenly there was a loud deafening scream-roar-growl noise and they head what sounded like heavy footsteps coming from the field adjacent to them. They then saw, running towards them, on what appeared to be somewhat all fours, a massive creature with long shaggy hair. It stopped about 15 feet away and stood up and it had to have been at least 16 feet tall. They ran to their car and the creature apparently chased them. As they got to their car another vehicle was coming down the road, apparently scaring the creature away. They came back the next day and found some rather weird looking tracks or footprints in the field. (Source: Ron Schaffner)