Length of time the encounter lasted: Only a few seconds.

"Hi there, I have a situation that I'm not sure how to handle. This situation has occurred over a 3 month period. I live on a 600 acre farm here in KY, pasture land with cattle and several large ponds. I have a 13 year old son, who loves going fishing in these ponds and exploring in the woods. A few months ago, he went fishing at one of the ponds furthest from the house. When he got home he told me that he saw a footprint, a large bare foot print. I thought this was odd but didn't really think anything of it and just cautioned him about going so far out. A couple months later, he again went fishing at this same pond and came upon a structure. My son said it looked like a lot of trees bent down into a dome, he said he walked all around the dome. Then he went back to the pond and he heard what sounded like someone taking a couple of steps, twigs breaking, trying to sneak up on him. This freaked him out and he left, running all the way home. This brings me to the point that I know, something is out there. This past Saturday around 6am, I was still in bed and my son came into my bedroom and he looked like he had seen a ghost! My son is not the drama type kid, he is quite the opposite. I asked him what was wrong and he said that he was down at the edge of the corn field just behind our house and all of a sudden, he heard what he said, sounded like gunshots, I now know these to be wood knocks. My son said it sounded like there was more than 1, coming from the woods below the corn field. Scared, he said he took off running towards the house. When he was running towards home he said he heard something behind him and he stopped, looked back to where the noise came from, as my son was telling me this part he started shaking and crying, which is not something a young teenage boy likes to do but it was uncontrollable, he said he saw a HUGE bigfoot walking thru a clearing at the edge of the woods. He said he just froze and couldn't move, that he couldn't believe what he was seeing. Then he said he felt a burst of adrenaline and ran as fast as he could the rest of the way home. In describing it to me he said, it was so tall he couldn't see the head, it was in the trees or the feet, because of the weeds. This thing is at least 8 1/2 feet tall, not including the head and 41/2 wide and he said it was walking kinda in a stooped position. I don't know what to do. I have never been a bigfoot thinking type of person, just your average person who has always heard of them being spotted. I know my son though and I believe him. I have been watching every bigfoot video I can find on YouTube, including yours, since the May 23rd. I have been researching the web also but I don't know what to do. My son didn't want me to tell anyone, he is afraid that someone might want to hurt them." - Jacob’s Mother

We messaged Jacob’s mother multiple times beginning May 28th. We asked her, "Does he watch any of the Bigfoot shows on TV, or is he a Bigfoot enthusiast?" She said, “No. He's actually very disappointed this has happened because he loves to fish and hunt on the property and now he's afraid to go back." We also set a date and time for an investigation.

Dana and I arrived at the residence around 6:30pm. We met the mom, Jacob and a few siblings in the yard. Jacob was very soft spoken and reserved. After some introductions, Jacob led the way to the sighting location. After about ¼ mile hike behind the farm, we reached the location of the sighting. 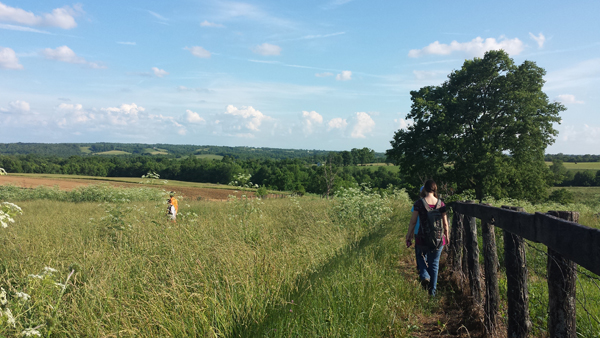 Dana following the family to the spot of the sighting. 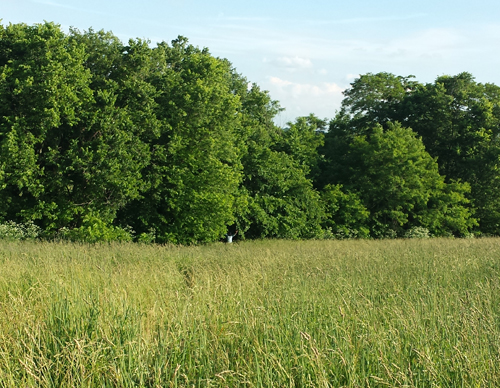 This is the view from the edge of the field where Jacob was standing. You can see me (Charlie) standing in the opening with my left arm up. The distance is about 75 yards away. Jacob told us he stopped here and looked toward the treeline after hearing multiple loud knocks. Jacob observed an upright creature take one step from left to right across this opening in the treeline. He said it was huge and brown, filling the entire opening. The head was inside the trees (putting it over 8 foot tall), so he only observed a glimpse of it’s torso. It’s arms were down by it’s side. It only took one step and quickly disappeared. At this spot, inside the treeline, the tall grass was matted down ALL over the place, like something paced back and forth in every direction. Something had definitely walked all through that area, there were no distinct game trails. Because the grass was so very thick and matted, no obvious (castable) tracks were noticeable. We did observe deer bedding areas in the field as we walked down to the treeline. Was there a Bigfoot inside the treeline watching deer that early morning?

Jacob took us to the other spots, however the possible shelter turned out to be a natural tree formation and unfortunately no footprints were discovered at other locations. Before we called it an evening, we tried a few tree knocks, but no replies.

I found Jacob to be very sincere and honest. His mother told us that he really did not want us to come out. His mom asked him, “Why, did you make it up?” He said, “No. I don’t want them to hurt it.” Because his mother also told us he was afraid to go back alone, we reassured both mom and son, that in over 20 years of taking reports in KY, we’ve never received an attack on a person. Intimidation behavior, yes, just to let you know you should leave its territory, but never any bodily harm. We suggested they watch the movie, Harry and the Hendersons.and gave Jacob a few Bigfoot gifts.

Length of the sighting: 3-5 seconds

Witness called on 3-26-12 to report his encounter. He was very excited and shaken up. Throughout the interview he kept saying, “I’ve got chills just telling you this.” He also asked repeatedly if these things were dangerous. Early that morning the witness and his girlfriend were laying in bed which is located on the second floor. Even though the windows were closed they began hearing screaming/howling coming from their backyard. It would last about 3 seconds and he described it as having a rough/throaty voice. He sprang out of bed and looked out the window to see a 6 ft tall, white, hairy creature walking across his backyard. He estimates it at 250-300 pounds with very wide shoulders. He said he froze as he watched it walk from the corner of his house towards the back of his workshop. His backyard was well-lit from the reflection off the white siding on his house and workshop. The thing he fixated most on was its head and face. He couldn't get past the head and face. It looked very human like with an extremely wide, flat nose. It had a hooded nose and it "looked like a boxer who had been punched in the nose." The head was round with one to two inch long hair. The face had “soft” looking hair which covered most of the face. The skin on the face looked very tan and blended into the white fur. It had the sort of the same beard that Patty does in the Patterson footage. He did notice the ears which were very human-like -- they stuck through the hair and were the size of a silver dollar. The hair on its body was very odd in that it seemed much longer on top of the shoulders and moderately less on the rest of the body. He walked fairly slow, appearing to be in no big hurry. The arms hung low by its side, but not swinging. As it walked away from from his house, towards the back of his workshop, he could see the hands which looked dirty like a mechanic’s hands -- no hair on them. The entire sighting only last 3 to 5 seconds and when his girlfriend came to the window the creature was already behind the workshop, she was able to see its shadow after it had peeked it’s head out from around the corner of workshop. The next morning they could see where it had walked through the freshly cut grass. They found a plant that had been uprooted. Also noticed were a pair of needle-nose pliers stuck in the flower bed and some scratches on a window seal above the flower garden. A partial hand print in the flower garden was noticed as well. He said after seeing it he was very shaken up and almost in tears. It’s been a long time since I’ve received a phone call where the witness was this excited and distraught after an encounter. 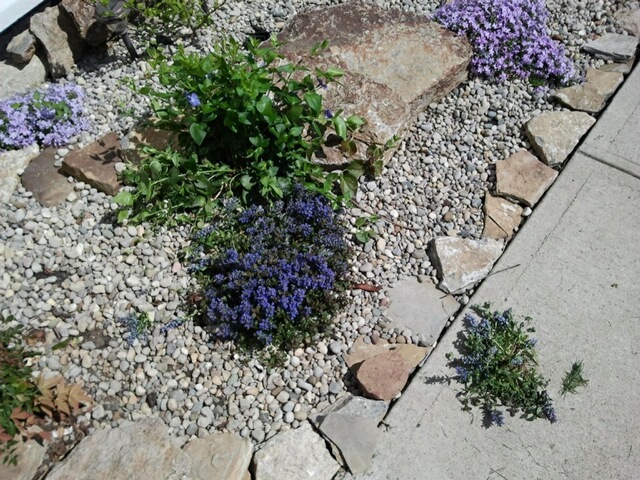 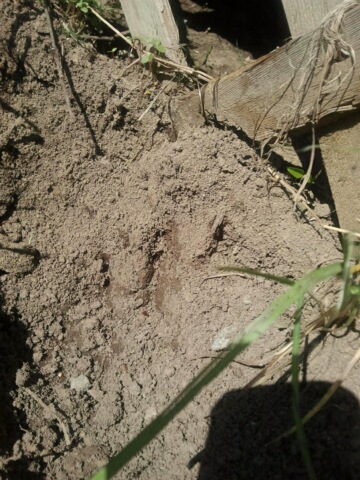